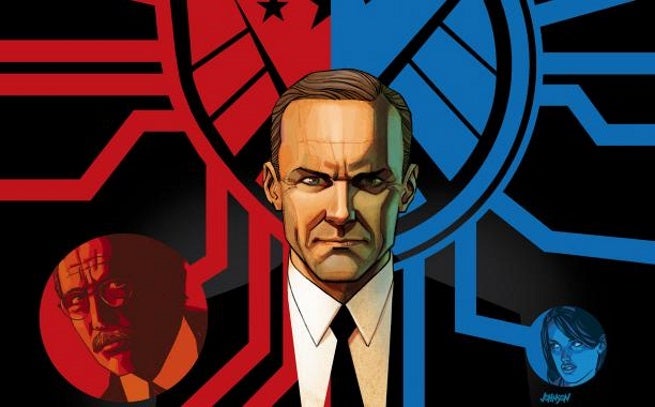 The latest installment in the Agents of S.H.I.E.L.D. Art of Evolution teaser art series has been released.

The latest art, from Dave Johnson (100 Bullets, Deadpool, Punisher), teases the April 7 episode "Afterlife." The poster is centered on Director Phil Coulson (Clark Gregg), placing him right in the middle of the new struggle between his S.H.I.E.L.D. and the rival organization led by Robert Gonzales (Edward James Olmos).

With Bobbi (Adrianne Palicki) and Mack (Henry Simmons) revealing their allegiance to Gonzales, Bobbi's ex-husband Lance Hunter (Nick Blood) has sided with Coulson, and now the two of them must hatch a plan to strike back at the so-called "real S.H.I.E.L.D."

"Meeting Luke's character in the Inhuman world is just setting up a new dynamic," executive producer Jeff Bell tells EW. "We're taking her into a group with a whole bunch of different people. So far, we've seen that there's a guy with no eyes, and there's a woman who now is covered in thorns. And as in the X-Men world, there are a handful of people who look more like them, but a lot of them turn out to be just attractive people with powers. And we thought, 'Hey, let's have some of those as well!' [laughs] We were looking for a new character to come on, and Luke just really impressed us. He was a good actor, had a nice quality, and we felt he might be a good person to sort of usher Skye into this other world."

In "Afterlife," as Robert Gonzales makes his move, Coulson must do whatever it takes to protect the future of S.H.I.E.L.D. Meanwhile Skye's journey to control her powers takes a surprising turn when she meets the enigmatic Inhuman named Lincoln.

Check out Dave Johnson's full poster in the gallery below.

Today, also happens to be Clark Gregg's birthday, so it's fitting that he would get a tribute poster today.