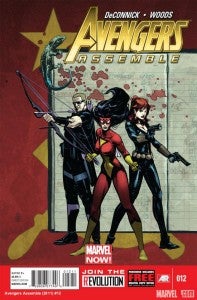 Kelly Sue DeConnick's new arc on Avengers Assemble, the most movie-friendly of all of Marvel's Avengers titles, will reportedly begin with the series's twelfth issue. The story, titled "The Widow's Ledger," will kick off with art by Legion Lost penciller Pete Woods, not Stefano Caselli, who drew DeConnick's earliest issues on the series. Whether this is a permanent change, a one-arc deal or whether the creative teams were always intended to stay together only for an arc at a time is not entirely clear. Not much information has yet been provided by Marvel, who say more will be available tomorrow at New York Comic Con. "The Black Widow finds her past catching up to her and faces it head-on with Hawkeye and Spider-Woman at her side" is all the description the arc gets, besides the issue number and creative team. The cover, which literally depicts the "blood on my ledger" that Black Widow lamented in Marvel's The Avengers this summer, once again ties Widow's movie story in with her comic book one and raises some questions about whether Spider-Woman may appear in the next film. Many fans speculated when she first appeared on the covers that the character might appear in the films, as Carol Danvers is rumored to be doing. The former Ms. Marvel, now Captain Marvel, currently stars in another Marvel series written by DeConnick. Even if it was easy to dismiss the Spider-Woman question as mere speculation before, having her so prominently featured in Avengers Assemble is likely to bring questions.