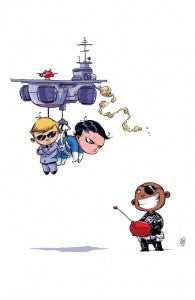 Skottie Young's "baby variant" for Marvel NOW! Point One #1 debuted earlier today, showing off his infantile take on Nick Fury, Agent Coulson and Maria Hill, the three most recognizable faces of S.H.I.E.L.D. The story, which will kick off the Marvel NOW! relaunch, will presumably center largely around S.H.I.E.L.D., since its first teasers all featured Fury. Check out the image at right and more information below, including the solicitation text for the issue!