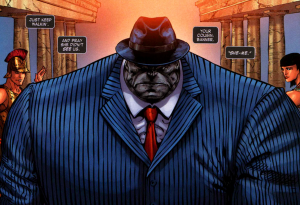 So there have been a few discussions already about what we'd like to see, or think we'll see, in The Avengers 2. But let's be honest--it's all kind of blind speculation at this point. And since there's really no telling what Whedon and company might do the next time around, why not reach for the stars and pick some really, really wacky stuff? Mister Fix-It We've already seen that the movie version of the Incredible Hulk can talk and function and strategize more than most of the non-comics interpretations of the character. So why not this? The idea of The Incredible Hulk as kind of a jerk who liked to mess with Banner really appeals to us; in his terrific book, Why Does Batman Carry Shark Repellent, Comic Book Resources columnist Brian Cronin cited an example where Mr. Fixit actually drank an entire liquor store, just so that Banner would wake up the next morning with a godawful hangover. Squadron Supreme Both the Squadron Supreme and the Squadron Sinister were thinly-veiled send-ups of DC heroes and villains. In The Avengers, there would have been no reason to do a thing like that, and it wouldn't have made a ton of sense...but in the same year that Avengers 2 comes out, Warner Brothers is reportedly hoping to get Justice League into the theaters. Can you imagine how clever it would seem to movie audiences (who have no background for the characters' source material, of course) if there were Justice League parodies hidden in the new Avengers movie. 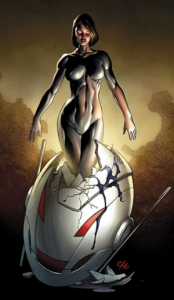 Ultron Initative This is probably just what happens when you hire cheesecake artist Frank Cho to draw The Avengers for a while, but when Brian Michael Bendis first kicked off New Avengers way back when, the first major story he dealt with was an Ultron story (this is interesting in that, of course, his last major Avengers tale is supposed to be an Ultron story, assuming it still happens eventually). Because it's been a while since we read it, we're going to swipe the incredibly bizarre synopsis from MTV Geek:

"It did start with evil robot Ultron enacting his master plan to rule the world by taking over Iron Man's biological armor, and transforming both of them into... A naked, metal version of The Wasp. Who then proceeded to kick everyone's butt. While naked. And a woman. We're not crazy about the subtext that Ultron thinks he'll be more successful at his villainous plots if he amps up his estrogen levels, but we do like that Tony Stark was forced to live out the most cracked out version of Tootsie ever."

Well, right now we've got Kid Loki floating around, but both Thor and Loki haven't been averse to being women from time to time, either. And while Tom Hiddleston would make quite a fetching young lady, it might force himself to re-examine some of his use of slang. On the other hand, there's Chris Hemsworth. It's hard to imagine a more comically ugly woman than he. So let's get on that! 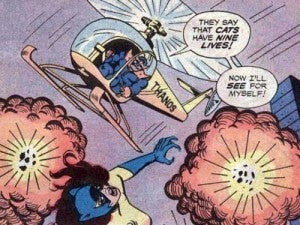 Thanoscopter! The Thanoscopter is one of the most notoriously bizarre things about the character--and that's a character, if you'll remember, who spends most of his time trying to kill everyone in the universe in the vain hopes of getting in lady death's panties. Introduced in a story where Thanos was trying to get the Cosmic Cube from Hellcat, the Thanoscopter was literally nothing but a one-man helicopter that was apparently intended to solve the problem that Thanos does not fly. Of course, how Thanos got to earth in order to use the helicopter to get around here remains to be seen. In any event, the Thanoscopter is so surreal that it would be hilarious to see them find a way to incorporate it into the movie, even if it's not an ACTUAL Thanoscopter but something where he ends up commandeering or destroying a one-man chopper.

The Avengers 2: The Five Wackiest Things We Want to See