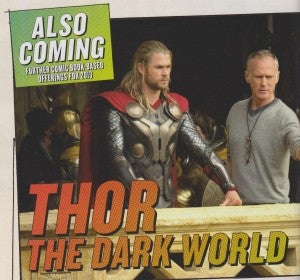 In this week's Empire Magazine superhero film feature, Thor: The Dark World producer Craig Kyle confirmed that there will be a second race of villains beyond just the already-announced Dark Elves in the film, and discussed what the filmmakers see as an oblication to "constantly redefine" the superhero movie genre in order to keep it fresh. "Like in Indiana Jones, while there's high stakes and high danger, there's always fun," Kyle said (via CBM). "We have to constantly redefine what a superhero film is or it'd just exhaust the audience. So Iron Man is the James Bond-y, classic, suave action hero; Captain America's the period piece; Hulk is the monster movie; Avengers the disaster movie; and Thor is the science-fiction epic." "Expectations are high," for Thor: The Dark World, the producer admitted, especially on the heels of Marvel's The Avengers. "By bringing director Alan Taylor into the mix, with his expertise on The Sopranos, Mad Men and Game Of Thrones, we came up with a take that allows us to get more into the nooks and crannies of Asgard and its people. We spend more time on the ground with the commoners, as opposed to in the palace. It's a very complicated blend [of genres: high science fiction, gritty fantasy, and realism]. Thor is, until Guardians of the Galaxy hits, by far our most wild, fringe Marvel piece. But that's why it's the Marvel Universe and not Marvel Earth!" Which, of course, begs the question: When Guardians of the Galaxy does hit, and becomes the sci-fi epic of the Marvel catalog, what role will the Thor franchise take on, assuming that both of them are still running after 2014? Here are some other bits from the interview, less quotable but still interesting, collected by CBM: 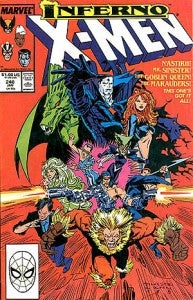 A few things, there: this confirms what many had already speculated as to another race of villains joining in the fight, and really sets up a World War II-style buffet of enemies for the Asgardians, with Malekith and his troops, Kurse and these Marauders. According to Wikipedia, The Marauders "make their first appearance in Uncanny X-Men #210 during the 1986 crossover, the Mutant Massacre, slaughtering a large percentage of the mutant community living beneath Manhattan known as the Morlocks. During their battles with the X-Men, X-Factor including the Norse God Thor, several Marauders are apparently killed; Riptide in Uncanny X-Men #211; Prism in X-Factor #10; and Blockbuster in The Mighty Thor #374. After the Mutant Massacre, Sabretooth attacked some kids in the tunnels in Daredevil #238." Of course, a number of changes will have to be made to the comic book Marauders, particularly since Marvel Studios don't own the rights to X-Men or related characters, and at the time Thor: The Dark World was being written, they had no way of knowing that the Daredevil rights would have reverted. With all of that said, it would seem that Marvel just chose to use the team's name, with little or no connection to the characters in the comic, right? Well,  X-Men: Mutant Massacre is set for a trade paperback reissue in February 2013. Coincidence? It seems unlikely.