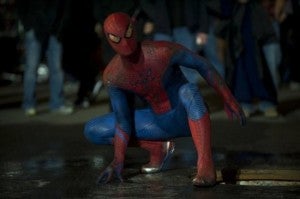 Want to see a sneak peek of The Amazing Spider-Man? Well, good news for you is coming on Friday: If you can find somewhere to see Men in Black 3 in IMAX 3D, there will be a six-minute preview of The Amazing Spider-Man running ahead of the film. Not long ago, The Dark Knight Rises did the same thing ahead of the theatrical release of Mission Impossible: Ghost Protocol. It provided the studio with valuable feedback, as they were able to be responsive to audience complaints about Bane's voice, which has since reportedly been corrected. No further information is available in terms of exactly what part of the movie will be screened, but your first chance to see a good chunk of the anticipated Spider-reboot will be this Thursday at midnight screenings around the country. A four-minute sneak preview of the film wowed fans on the Internet last weekend.