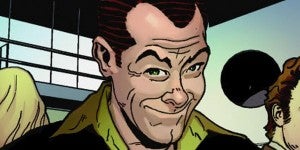 Harry Osborn, Peter Parker's close friend and eventual archenemy who was played by James Franco in the Sam Raimi Spider-Man films, will be a part of The Amazing Spider-Man 2 and is currently being cast, according to The Hollywood Reporter. Despite the fact that Peter Parker is a high school student in the new franchise, the article still describes Osborn as being college-aged. It's unclear whether that's based on insider knowledge of the upcoming film or if they're just basing it on previously-existing material. Here's what the magazine has to say about the casting process, currently underway with filmmaker Marc Webb and others:

The Osborn part, which originally called for a bigger, athletic actor, is being reconfigured and now is targeting a more "dark and edgy" actor, according to two insiders. Names bandied about include Brady Corbet (Melancholia), Dane DeHaan (Chronicle) andAlden Ehrenreich (the upcoming Beautiful Creatures), though there could be other names in the mix because the character is evolving.

So far, the cast for the film includes Andrew Garfield, who is committed to return for a second installment, as well as Sally Field and Emma Stone, who are assumed to be returning as well. The Descendants actress Shailene Woodley will join the cast as Mary Jane Watson and Jamie Foxx is reportedly in talks to take on the role of Electro, who will reportedly be the film's principal antagonist. Campbell Scott should return as Peter's father, as the film will reportedly explore more of the character's relationship with his parents. Theories abound as to when and whether Norman Osborn--Harry's father and the first Green Goblin--will appear in the trilogy after the first film revolved around his company but Osborn himself never appeared. Some believe that he'll be a second villain, or at least a puppet master, in the next film while still others believe that Sony and Webb will hold off on introducing the character until the third film.