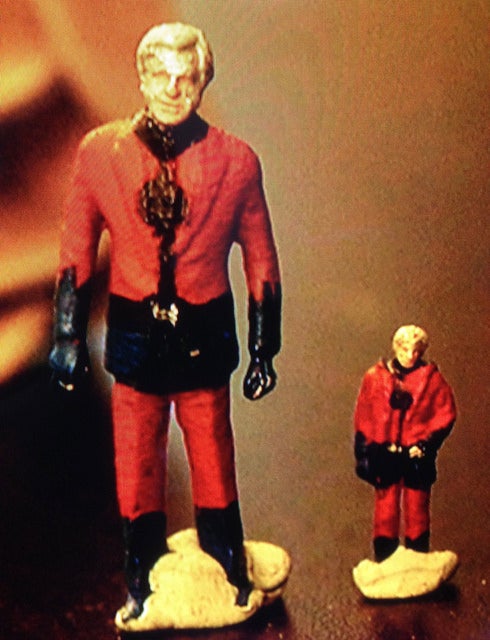 Ever since Michael Douglas was cast as Hank Pym and it was revealed that the central character of Marvel's Ant-Man movie will be Scott Lang, fans have wondered whether Pym--the inventor of the Ant-Man technology and the first and best-known Ant-Man in the comic book source material--will ever have been a superhero in his own right. It appears, if a blog post by director Edgar Wright is to be taken at face value, that the answer is yes. The January 25 blog post featured a miniature positioned in a miniature hallway. It wasn't clear who, if anyone, that character was supposed to be in specific. The post four days later, though, features a larger Ant-Man figurine and a smaller one side-by-side, and both of them certainly appear to be much more Michael Douglas than Paul Rudd. Oh, and the Ant-Man figures both look like the classic '60s Ant-Man costume worn by Pym (albeit without the helmet). Here, then, it certainly seems like the implication is that Pym had a costumed identity years ago, likely one that he'll have surrendered to S.H.I.E.L.D., for whom he developed the technology. None of this is all that surprising, when you consider that Wright has had this film in development for nearly a decade, and in the early days Marvel was perhaps not quite so over-the-top about their security. Wright gave interviews, describing the gist of the film, in which he said that the present day story would feature Lang and an older Pym while there would be flashback elements where fans would see Pym as an action hero in his own right.