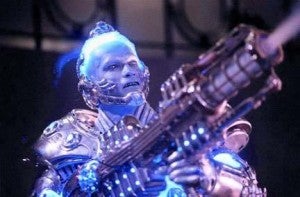 During an interview in this week's edition of Empire, veteran action star Arnold Schwarzenegger says he doesn't regret having appeared in Batman & Robin, one of the worst-reviewed superhero films of all time. "In most cases I don't regret the movies that failed or were not as good," said the former Caliornia governor. "It's always easy to be smug in hindsight, right?" As far as Batman & Robin in particular, he acknowledged that part of his involvement had to do with Warner Brothers (who distributed his film Eraser) pursuing him aggressively for the Batman film, but said even so "I don't regret it at all. I felt that the character was interesting and two movies before that one Joel Schumacher was at his height. So the decision-making process was not off. At the same time I was doing Eraser over there and Warner Bros. begged me to do the movie." the film he made two movies before Batman & Robin was, according to IMDb, Batman Forever, which was not widely beloved either but didn't get nearly the flak that the Schwarzenegger-fueled installment did. It's probably more likely, though, that the actor is referring to one of the three other films the director made in the time immediately surrounding Batman Forever--the critically-acclaimed A Time to Kill, The Client and Falling Down. The article also notes that Mr. Freeze was almost not Arnold's only comic book role; he was, at one point, in negotiations for Dr. Octopus in the Spider-Man franchise before a disagreement with the studio collapsed talks and they went in another direction with the character. Aw, man! Schwarzenegger could have been The Superior Spider-Man!