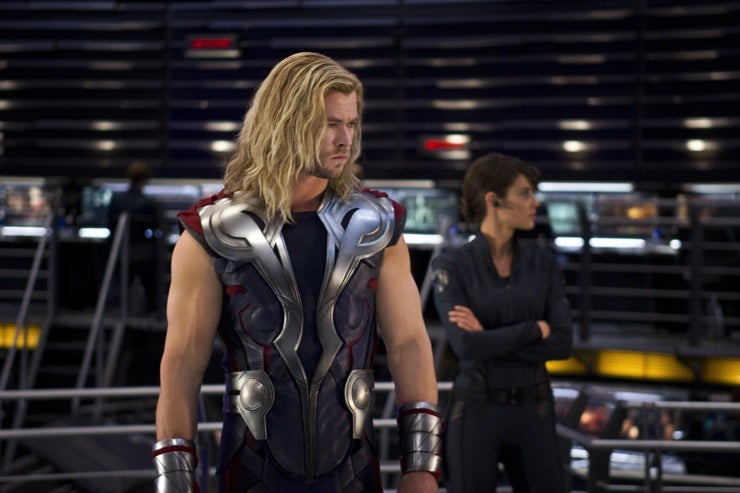 During Comic Con International: San Diego this past weekend, Avengers: Age of Ultron star Chris Hemsworth admitted in a press line with Comicbook.com that in spite of appearing as a lead in four Marvel movies and counting, his favorite might be one in which we don't see him appear.

"We'd win," he said when asked who would win a throwdown between the Avengers and the Guardians. "I have to say that because it's my team, but I saw Guardians of the Galaxy and I think it could be my favorite Marvel film. It's incredible! I love it -- so funny, so funny."

Pressed for details on Avengers: Age of Ultron, he couldn't give away much, but he did give two little nuggets.

"In the first one we saw everyone coming together and this one is kind of them splitting up in a number of ways. They're faced with a problem that is so great and so threatening that it just tears them apart," Hemsworth said. "Ultron is an artificial intelligence that has access to every piece of information that is and ever was and so is able to manipulate all sorts of things....We begin as a team, the problem is, are we going to stay together?"

One a more personal level, he told reporters that Thor himself is a bit more relatable this time out.

"Thor's been on Earth now for a while now," Hemsworth said. "He's part of team, so he's more of a relaxed, kind of civilian Thor, not sort of the prince-being that we've seen in the past."

Avengers: Age of Ultron's Chris Hemsworth: Guardians of the Galaxy Might Be My Favorite Marvel Film