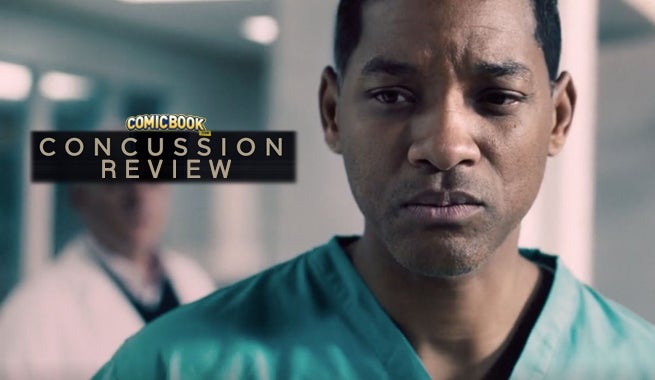 Ending the year with a hard hitting and well-received film is just what Sony Pictures needs. Its new movie Concussion is certainly hard hitting but it may not be well-received by everybody with its message to a football crazy America.

Concussion is not exactly a feel-good movie and won't send you home excited about what you just watched. You'll admire the performances but also the man whom the film is based on.

While it is an underdog story with Dr. Omalu (Will Smith) being the fighter in a weight class far above the one in which he belongs, Concussion is far from a typical sports movie. The competition here is between a good-hearted, talented doctor and a juggernaut corporation who, as stated in the film, "Owns a day of the week." He is an over-educated pathologist who discovers what seems like common sense: CTE (or brain damage from repetitive impacts).

As Omalu's revelations start to poke at the NFL's regime, his life starts to unravel at the hands of their unstoppable corporate manipulation. His once happy, fruitful relationship with Prema Mutiso (Gugu Mbatha-Raw) and plans for a future are seen being stripped one by one. His undeniably good intentions have him backed into an inescapable corner. Not only does Concussion make you feel for the NFL players suffering from its focal CTE disease but largely for its central character who wishes to help them.

That central character could not have been played more brilliantly unless shot in a documentary. There are a couple films left in 2015 for me to watch, but right now I can confidently say that Will Smith's performance in Concussion is the best performance of the year. After a lengthy monologue in which he begged an NFL doctor to tell the truth, I genuinelyh wanted to stand up in the theater and clap. The information Smith was relaying to the audience was delicate and very important to a lot of people. He couldn't have handled it with greater care.

Smith wasn't alone in the Outstanding Performance department here. The supporting cast also stepped up in a big way. Alec Baldwin managed to nail a southern accent as Louisiana-boy, Dr. Julian Bailes, in ways that The Walking Dead can't even match. He and Smith play off one another brilliantly and when it comes time for Bailes to give Omalu some bad news, our hearts break with both of them. Albert Brooks, who plays Dr. Cecyl Wecht also makes the absolute most of his screen time serving as Dr. Omalu's mentor, boss, and part of Concussion's comic relief.

What really helps Concussion be digested while dealing with such a dark, serious issue is its on-the-mark comedy. One moment, Dr. Omalu is digging into an NFL Hall of Famer to figure out why he died and the next we're given a much needed laugh.

Concussion's story is masterfully told and presented. Aside from the talent being in front of the camera, the ones we don't see until their names scroll by at the end also did a great job. Writer/director Peter Landesman allows the 123 minute run time to fly by while he grabs onto the audience with an unrelenting grip. Even as Dr. Omalu's job as a pathologist is explored, we're never forced to watch him disect bodies. It's the idea of the act and not the act itself which needs to be delivered and Landesman skates by the unnecessary grotesque shots with ease. That's not to say parents of young football players will watch this without their stomach in knots as clips of hard hitting and bone splitting impacts on the gridiron flash across the screen several times, often drawing vocal reactions from the audience.

Brain damage is a serious issue in the NFL. We know this because of the real Dr. Omalu's persistence, drive, and desire to share knowledge. Concussion handles the issue with care and should build a great buzz about the NFL's choices from 2002 until today. Will Smith commands the screen in a performance which is both heartbreaking and triumphant, giving us one 2015's best films.

Bottom Line: Concussion is a hard hitting, well-executed film. What could have easily become an overly dark biopic delivers a compelling truth showcases the NFL's faults through one of Will Smith's best performances. 9.3/10

Review: Concussion Is Hard-Hitting And Compelling