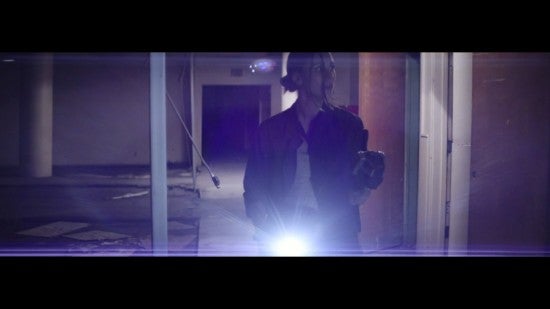 While he works on a script for a comic book adaptation he describes as a "summer blockbuster, with lots of explosions," up-and-coming filmmaker BenDavid Grabinski is also directing at least the pilot -- and perhaps more -- for Machinima's new webseries based on Tim Daniel's Enormous, originally published for Image Comics with Heavy Metal veteran Mehdi Cheggour. He told ComicBook.com that the experiences are night and day; Michinima is about using what you have to create the best possible representation of your vision, whereas a larger production starts with the idea and you just worry about making it happen later, since the resources will be there. "Making this is one of the most difficult experience I'll ever have from logistics and stuff like that," Grabinski told ComicBook.com. "But I'm really invested in the characters and the story." 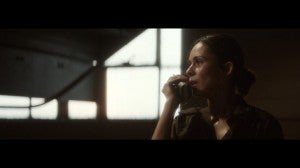 One of those characters is played by Ceren Lee, a model and actress whose only prior credit on IMDb is the short film After the Denim. "For me, it wasn't even my genre so I'd never heard of Enormous; I wasn't really into the sci-fi, post-apocalypstc thing as a female or whatever that is as an artist," Lee admitted. "Then I read the material. I read BenDavid's version of the material, and it was really incredible. I didn't want it to end. I was totally obsessed and I wanted to know what was going to happen next. When I met Tim Daniel that was the thing that clinched it all together for me. He was a great guy and so enthusiastic." Lee, whose husband is actor Jason Lee of Mallrats and Chasing Amy fame, compared the production to early Kevin Smith or Quentin Tarantino films, saying that Machinima has that same manic sense of everybody pitching in that she imagines the indie films of the '90s having. "I've seen lots of things, from the big budget things my husband has done to the smaller things that don't have the money and don't have the manpower," Lee told us. "BenDavid called in friends as actors and had a second unit director who was one of his friends. We were just so excited to be there because it felt guerilla-style like the movies that were made in the '90s where everybody took every cent he had in their pockets and just made what they wanted to make." 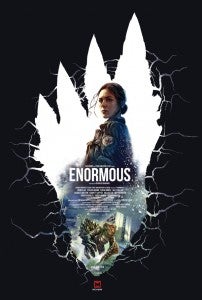 Asked to describe the series for the uninitiated, Grabinski said that Enormous was "The Walking Dead meets Godzilla: Survivors in the apocalypse but instead of zombies its giant monsters." "Survivors in the apocalypse and their POV of giant monsters," he elaborated. "So Cloverfield is a found-footage thing but is a movie that's solely with a small group of people and you never really leave their vantage point. That's the same thing I wanted to do with Enormous but with more classic, traditional cinematography and 'try to class it up a bit.'" He added, "Nobody's done a giant monster series on TV or the Internet. There hasn't been a live action giant monster TV series or webseries before and I wanted to find a fresh way of doing that that wouldn't be derivative." He noted that Lee's character, Ellen, is in both the comic and the webseries; she's very similar, but Machinima is also open-ended about how they're going to be dealing with her backstory. Daniel was involved with the production, he said, but let them just work their magic. He described the writer as being the happiest guy on set, all the time, and said that it helped that Daniel had a familiarity with Grabinski's previous work and so the two had trust. "He didn't make me feel like I had to stick with everything," Grabinski said. "The issue was that everything he had was visually great and interesting but I didn't want to feel like I was tied down to anything. He was a big fan of Cost of Living which was helpful because he wanted me to keep what I'd been doing." That paid off, apparently, as it was Grabinski's influence that drove so much of Lee's performance in the pilot. "What was so great about this was the intimacy between each of the cast members and BenDavid and I know that on big budget things, they move so much faster and there's so many people involved you lose that intimacy," Lee said. "What's so great is that half the time BenDavid wasn't looking at the playback but he was working with you....He said, 'I'll look at the playback later because I want to do what I can do with you now.' If I, one day, were to direct something, that's the involvement I would want with every one of my actors, it's kind of that guerilla thing I was talking about. You become all for one, one for all, and everyone's helping each other." Grabinski gave a lot of credit to the crew, who he said made that approach possible. "I did all of Cost of Living behind the monitor and after about one scene on Enormous I changed my entire approach, partially because my cinematographer Morgan Susser and I are so completely in sync that I decided I was just going to focus on the acting," Grabinski said. "I knew that if I told Morgan what I wanted to do, I know it's going to work out. I decided I would just focus on the actor and then I would turn to him and say, 'Morgan did we get it?' I enjoyed that process so much more that I don't think I'm ever going to do it the other way again unless someone forces me to." But will he return if this pilot finds an audience? It seems likely, even with his big, explosive, mystery project looming. "I would like to do more. I probably will," he said. "There are definitely plans to be doing the entire first season and there's discussions about how we're going to approach that and what directions to take. I have a lot of ideas from both a narrative and a story standpoint. That's just how I work is that you have to get invested in something; I don't work on anything unless I get pretty aggressive about it. If you don't it just gets mechanical and in a way it's more work than it needs to be."