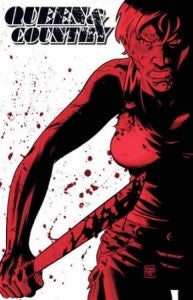 Regular readers of the site will know that best-selling comics creator Greg Rucka and illustrator Michael Lark have a recurring feature here wherein they join us for a "commentary track"-style interview for Lazarus, their creator-owned series through Image Comics. You can check out the first issue's commentary here and the second issue's commentary here. Well, we haven't gotten around to reviewing #3 yet; we do it via Skype, and there were scheduling conflicts. The commentary is coming soon, but in the meantime there's some big news coming out of the Rucka camp: His Queen & Country, as we just reported, is being developed for film and Fox is reportedly talking to X-Men: Days of Future Past star Ellen Page to star in not just the first film but potentially in a new franchise for the star. It's not a done deal--at this point it's an unconfirmed story in the trades, but Variety is the kind of source that other reporters take largely as gospel because they're on the inside of the industry. We reached out to Rucka for a check-in on his thoughts on the report. "I'm thrilled at the news that's making the rounds today, and I couldn't be more delighted to see an actress of Ellen Page's incredibly talent associated with Queen & Country, nor a writer of John Rogers' caliber on the script," Rucka told ComicBook.com in a statement. "Peter Chernin and Jenno Topping have been in the trenches on Queen & Country for a long, long time, and their passion for the material is rare and remarkable. It's Hollywood, of course, and things may change and things may happen, but right now? Man, I could not be happier at the news." Rogers isn't so sure they're using his version of the script, and is cautioning his well-wishers on Twitter. Rucka, for his part, thinks Rogers is a clear choice based on what he's seen, but urges due caution regarding the progress of the long-in-development film itself. "I'm outside the process," he added when we e-mailed to find out whether he was certain it was Rogers's script. "All I can say is that I'm delighted by what I read, and that John is a great writer who gets the material in a way no one else has done."