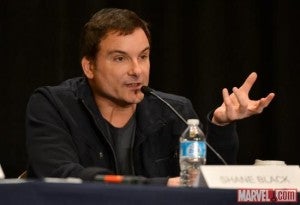 There's some potentially good news for Iron Man 3 fans when it comes to the DVD and Blu-ray that will eventually be released. Some directors wind up using pretty much all the footage they shoot in a movie's theatrical release, which doesn't leave much left over for an extended version or deleted clips section on the DVD release. However, it looks like lack of unused footage won't be a problem with Iron Man 3, as director Shane Black has revealed that the first assembled cut of Iron Man 3 was over three hours long. In fact, Shane Black cut away almost a whole movie. In a podcast interview with Empire Online, Shane Black said, "The movie came in as an assembly at 3 hours and 15 minutes, and it ended up being one fifty nine something. We cut an hour and fifteen minutes worth of footage." Shane Black added, "Picture sitting still for an hour and fifteen minutes, that's a movie. We lost a movie out of the movie, and I don't know how we did it, and that's the miracle. So it's a leap of faith, I never believed we could have cut it down and still have it make sense." Wouldn't it be cool if Disney releases the entire 3 hours and 15 minutes version on the DVD and/or Blu-ray?