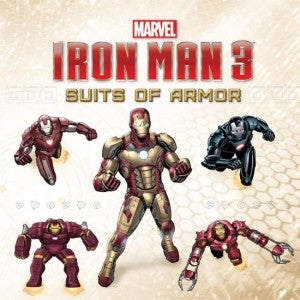 While some of suits of armor that will appear in Iron Man 3 have already been revealed online, others have remained a mystery. A new children's books released today called Iron Man 3: Suits Of Armor reveals some previously unrevealed suits of armor. In total, there are fourteen suits of armor that are featured in the book, and we're expecting they are the suits of armor that will play the largest role in Iron Man 3. Here's a rundown of all of Tony Stark's various suits of armor. Mark I – Original armor built out of spare parts and various pieces of iron. It paved the way for all future Iron Man suits. While it didn't include a lot of features, the Mark I did have flamethrowers. The Mark I appeared in the first Iron Man movie. Mark VII – Portable armor that is equipped with additional thrusters on the backs of the feet, calves, and legs. The Mark VII was used in The Avengers 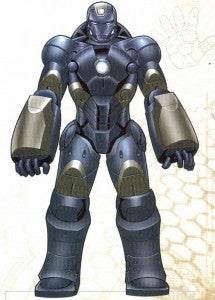 movie. Mark XLII – The Mark XLII is make out of separate pieces that can fly to Tony Stark and form a suit around his body. It's controlled from a state-of-art chip implanted in Tony Stark's left forearm. Tony Stark can summon the pieces with just his thoughts. Sub-Orbital Suit (Mark XXXIX) –Known as Gemini, it is designed for otherworldly journey. It has an integrated, removable booster pack and zero-gravity maneuvering thrusters. Silver Centurion Suit (Mark XXXIII) – The Silver Centurion has a slight protective force field, which allows the suit to attract or repulse objects using magnetic polarity. The suit is capable of firing pulse cannons that build in intensity the further they travel. Stealth Suit (Mark XV) – Known as Sneaky, it is virtually invisible to enemy early-warning systems. A chrome colored coating on the armor can darken or lighten to match the environment. Black Stealth Suit (Mark XVI) – Similar to Sneaky, it doesn't have all the weapons and is designed for stealth missions. It's known as Nightclub armor. Deep Sea Suit (Mark XXXVII) – Known as Hammerhead, it's designed to be able to travel to the deepest parts of the ocean. It can withstand extreme pressure, and it has high-power work lights to allow visibility in murky waters. Heavy Lifting Suit (Mark XXXVIII) – Known as Igor, this armor actually wasn't designed for battle. It was created for heavy lifting and carrying heavy objects. Heavy Construction Suit (Mark XXV) – Known as Striker, it was designed to help with construction. Its powerful jackhammer-like arms can pulverize concrete.  It can withstand high temperatures and electrical surges. 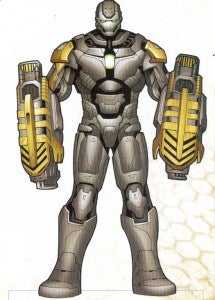 – Known as Shotgun, it's designed for hypersonic speed. It can travel in excess of Mach 5. Disaster-Rescue Suit (Mark XXXV) – Known as Red Snapper, this armor was designed to survive in dangerous places. The suit has extendable arms and claws making it ideal for disaster rescue. Artillery-Level RT Suit (Mark XII) – Known as Heartbreaker, it has an oversized chest RT, which can fire powerful blasts. The Heartbreaker can fire narrow or wide beams and can also generate a repulsor shield for protection. Skeleton Suit (Mark XLI) – Known as Bones, it's a black and gold lighter version of a full Iron man suit. Its purpose is speed and maneuverability. Iron Man 3 is scheduled to be released in theaters in the United States on May 3, 2013.