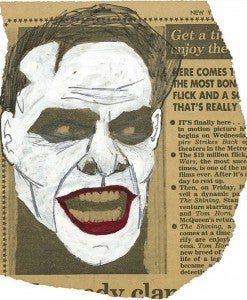 If you've ever had the opportunity to watch Batman movie Executive Producer Michael Uslan speak in person, then you know that he tells some very entertaining and engaging stories. One of the stories that he loves to tell is how he foresaw Jack Nicholson in the role of The Joker. Michael Uslan acquired the film rights to Batman back in 1979, and he proceeded to start pitching Hollywood on the idea of a Batman movie with a more serious tone than the campy sixties TV show. In 1980, he drew a red and white joker face over a newspaper image of Jack Nicholson in The Shining. It was that Joker drawing that he took around to pitch the project, and Nicholson was eventually cast as the Joker in the 1989 Batman movie from director Tim Burton. Now, the very piece of Joker inspiration art used by Michael Uslan to pitch a Batman movie is up for auction. The art also comes with an autographed copy of Michael Uslan's memoir, The Boy Who Loved Batman. The item is being auctioned on ComicConnect.com with an ending date of Monday, December 3, 2012.