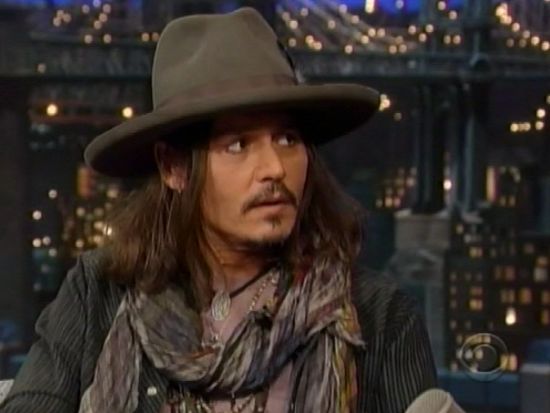 In an appearance on The Late Show With David Letterman on Thursday night, Johnny Depp relayed a story about nearly getting killed on the set of The Lone Ranger. As one would expect, Johnny Depp's role as Tonto required him to do a lot of horseback riding. In talking about riding horses at top speed, Johnny Depp said, "There was one moment in particular where it got unpleasant. The horses had been running, we'd been running them all day. They weren't really interested in slowing down at all." While they were shooting scenes in the desert where there were a bunch of bumps, Johnny Depp's horse decided to jump some of the obstacles. The saddle that Johnny Depp was using was jerry-rigged to give the effect that he was riding bareback, so it wasn't tight on the horse. Depp said, "When we came down, the saddle slipped, and I went to the left." Johnny Depp managed to grab the reins and the mane of the horse to stay on. However, Johnny Depp had to make a decision to go with the beast until someone wrangled it or to drop, and he chose to drop. A surprised Letterman said, "You really could have been seriously, seriously injured if not killed." Depp agreed, "Horrifically mangled at the very least." Johnny Depp told Letterman that he landed on his back. Depp added, "The one thing that saved me was the horse's instinct to lift his front legs and go over me….stepped over me. Had he not, it [the horse's hooves] was coming straight down into the head." Fortunately, the horse just barely clipped Johnny Depp with his back legs, so Depp just wound up a little store, rather than experiencing life-threatening injuries.