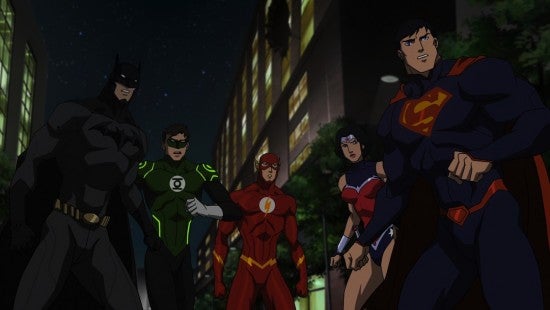 The release on Blu-ray and DVD tomorrow of Justice League: War marks the start of an interconnected DC animated movie universe, with future movies tying into the same continuity established with the new release, Comic Book Resources reports. Really, that arguably means that the DC animated movie universe has already launched--both because Justice League: War is already widely available via legal digital download and on-demand services and because it picks up explicitly from the cliffhanger at the end of last year's Justice League: The Flashpoint Paradox. It may be that the casting for the new "continuity" simply hadn't been finished yet at that time. "This will definitely be the first salvo in doing new movies that are in continuity with each other," Justice League: War producer James Tucker told CBR. "Our next movie's going to be Son of Batman, and that Batman will be the same Batman that you see in Justice League: War. Basically, we'll have two concurrent series of Justice League movies and Batman movies, and they'll be in continuity with each other. So it's kind of world-building." 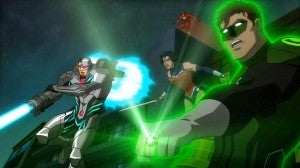 How this jives with other recent comments by filmmakers that they have some stand-alone ideas they'd still like to pursue is anybody's guess. What it does mean is that the DC Universe animated films really are now part of a "universe," and that universe is (at least a version of) the New 52. It also begs the question: will we ever get another shot with Kevin Conroy's fan-favorite take on Batman, or did that end with Flashpoint and we just never knew? It's also worth noting that he refers to this as being a Justice League movie and Batman movie universe; it seems likely, then, that the current approach of branding anyone not Batman or Superman as a Justice League film will continue. We expected as much, with the next Justice League movie after Son of Batman expected to be Justice League: Throne of Atlantis or something along those lines--basically an Aquaman-centric storyline, but without Aquaman's name in the title. Again, that's nothing new, as it's what they did with Flashpoint.