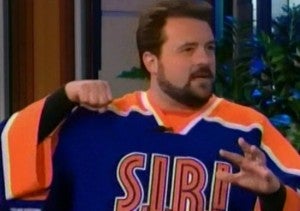 Apparently the Fat Man is just not that into Batman. During an interview with The Playlist, he called Joss Whedon's super-team flick "magical cinema" and said that, against all odds, it wowed him more than The Dark Knight Rises did. "The Dark Knight Rises I have a weird relationship with – it's like a chemical romance with a toxic ex-girlfriend where I love her to death but there are some things about her that are just f---ing wrong. The Avengers I loved so more than I thought I would. I've written for Marvel but I was never an Avengers guy. I'm more DC," Smith said in the interview. "But I've become obsessed with Favreau's Iron Man movie because I think it's very nearly a perfect film. So when I saw Favreau wasn't doing it I thought, Well what do I care? The first time I saw it was in Australia and it opened a week before it opened here and we were traveling for the 'Jay and Silent Bob Go Down Under' tour and we had just done a show and we went to a midnight show. And the first time I saw it I could not get past the Loki poke-y stick in the beginning. Because Loki sticks something in somebody's chest and it's like 'WAAMP, you're a bad guy.' What the f---? Is this the level of discourse we're going to have? But you can't deny that flick." He continued, "By the middle of it I was like, 'The Hulk is amazing.' The next time I watched it I was totally into it. You can't watch that movie and be like 'I object to the Loki poke-y stick' when there's a motherf---er who turns into a green giant. In my mind Marvel science is okay because we were raised on it. As someone who looks for realism in comics, you can say, 'Well, you could get belted by gamma rays and turn into someone else.' But you can't say, 'A stick from outer space that makes you a bad guy is bull----!' So I got past that and embraced the whole thing," Smith continued. "I've now watched Avengers about eight times, twice on a plane back-to-back. It just keeps giving. That's 10,000 across the board! Whedon in the driver's seat, 70-80 years of Marvel, and the charm f---ing factor of Robert Downey Jr. It runs like a golden machine. I never imagined that I would love Avengers more than Dark Knight Rises. Not only would I have never imagined that Dark Knight would underperform (based on other mitigating factors of course). But I would have never thought Avengers would make more than Dark Knight Rises. But I never would have thought I would have liked Avengers more than Dark Knight Rises but I really did like Avengers more. And I've watched them an equal amount of times. Avengers, I'm not going to say it's the better movie, but it puts a smile on your face. It's magical cinema."