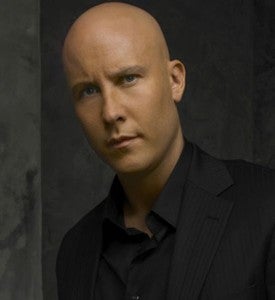 Earlier today, it was reported that Joseph Gordon-Levitt was up for the lead role of Star-Lord (a.k.a. Peter Quill) in Guardians of the Galaxy. Director James Gunn, who doesn't seem to hesitate to deny Guardians of the Galaxy rumors, has yet to comment on the rumor which has spread online like wildfire. There has also been no comment from actor Joseph Gordon-Levitt on the rumor. Now, it looks like another actor is in the running for the Star-Lord role. Actor Michael Rosenbaum himself just took to Twitter to declare that he has auditioned for the role. Michael Rosenbaum tweeted, "Read for my pal @JamesGunn GUARDIANS OF THE GALAXY for PETER QUILL. What a treat! Thanks Jimmy. @Marvel" Since this information comes from Michael Rosenbaum himself, it should be considered more reliable than all the rumors out there. Michael Rosenbaum is best known among comic book fans for playing Lex Luthor in the Smallville TV series on The CW.

Michael Rosenbaum Up For Guardians Of Galaxy Role