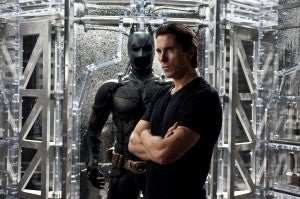 A new TV spot for The Dark Knight Rises aired Sunday night and managed to slip beneath our radar, possibly because there's some disagreement around the Internet as to whether this or another spot we already discussed is the third or fourth TV spot for the movie. This one is mostly action, though, albeit with a framing device that shows Bruce Wayne (Christian Bale) talking to his old friend Lucius Fox (Morgan Freeman), telling him that he's "retired" from the "night job" with which Fox has helped him often in the past. John Blake also gets a little screen time, too, and for a minor character he's just everywhere in these ads, isn't he? This time the dedicated Gotham cop is stumbling through puddles, in a damaged city, under fire. More and more, this movie is feeling like an adaptation of the events of No Man's Land. Check out the new TV spot below and let us know what you think.