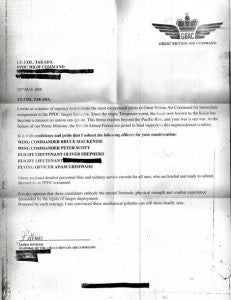 A viral campaign for the upcoming Kaiju vs. Mechs film Pacific Rim launched today, giving fans their first look at some of the monsters, mechs and even just some of the world of the movie. The first video, as well as an accompanying graphic shown at right, detail life in the time of a monster attack. The video is a look at the emergency alert system for kaiju attacks, while the memo comes from the Great Britain Air Command and gives a little more in the way of specifics. 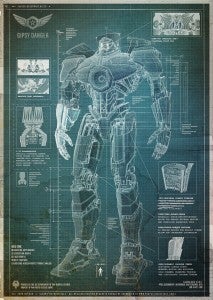 Shortly after those debuted, a high-resolution image of Gipsy Danger, one of the "Jaegers" - mechs designed to battle the Kaiju - was revealed in blueprint form. Obviously this isn't what it'll look like in the final film, but it's certainly a pretty good look, with a lot of nice little details put into the blueprints, including a look at the plasma cannon, the cooling vents (which use ocean water to cool the massive machine) and its size relative to an average-sized man (that's him itty bitty at the bottom of the page). Finally, we get another video, and this one's the money shot: a monster attack on San Francisco, during which the monster is said to cut a three-mile swath of destruction through the city before finally being brought down by Air Force jets and carried away the back of an aircraft carrier--an image that gives viewers a sense for the size and scope of the creatures. Pacific Rim is directed by Guillermo del Toro and is due in theaters July 11, 2013.