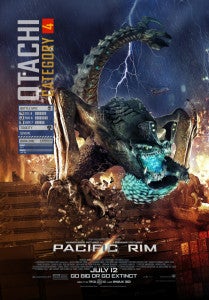 As Pacific Rim's release date rolls nearer, the promotional campaign for the film seems to have kicked into high gear this weekend, with a number of clips just released and now a pair of character posters. No, not for Idris Elba and Charlie Hunman. These character posters are for the giant CG creations that populate much of the film--one jaeger and one kaiju, in fact, and it wouldn't be surprising to see that this is the first in a week of similar reveals. The kaiju--seen at left--is called Otachi, and the Jaeger in question is Gipsy Danger, which of course we've seen a number of times before. 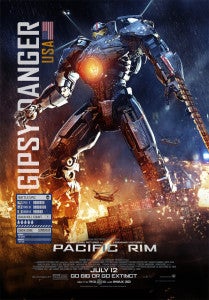 In fact, part of a fight between these two was featured in one of the clips released over the weekend. You can check it out below. Pacific Rim will be in theaters on July 12.