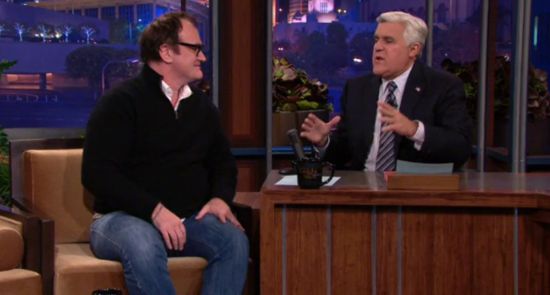 In an appearance on Tuesday night's Tonight Show, Quentin Tarantino made a nice plug for the collected edition of his Django Unchained comic book series. Tarantino explained that when he initially wrote his Django Unchained movie script that it was like a book. "The [Django Unchained] script has a lot of stuff that's not in the movie, so I gave it to DC Comics, and then they went and adapted the entire script into one big thing. It's about seven issues, and they came out with it in a hardback," said Tarantino. Tarantino also dropped a scoop to Jay Leno about his next movie. "I've never told anybody. I haven't told anybody about this publicly, but I will say the genre. It's a western. It's another western. It's not a Django sequel, but it's another western. And the thing is, I had so much fun doing Django and I love westerns so much that after I taught myself how to make one it's like "Well, okay, let me make another one now I know what I'm doing."

Quentin Tarantino's Next Movie Is A Western, But It's Not A Django Sequel