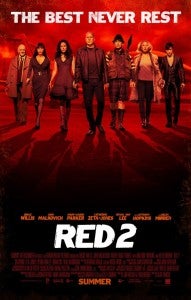 Given the nature of RED 2--an action-comedy about a retired spy whose own organization tried to kill him in the previous installment and who had to team with foreign operatives in order to save his own life and that of his love interest--it's perhaps not surprising that the recent scandals involving National Security Agency wiretapping and surveillance of Americans and foreign nationals and governments would spring to mind when the movie is being discussed. What's arguably more interesting is that Lionsgate, who are distributing the film, would make that part of the official promotional campaign for the film, with footage featuring President Barack Obama appearing in the latest ad for the movie. "I want to make it clear: nobody is listening to your telephone calls," says the President while footage from the movie rolls, including phones and Helen Mirren double-fisting pistols. "The people involved in national security take this work very seriously." Check out the trailer below.