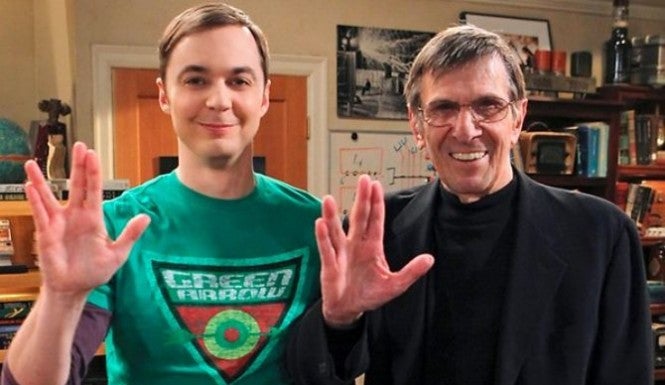 There are few actors who have a role as enduring or influential on popular culture as Leonard Nimoy had with Mr. Spock on Star Trek.

Enduring for nearly fifty years, Spock helped make Nimoy a recognizable name and face around the world, and as such helped propel him to coveted status as a "get" for filmmakers, TV shows and the like.

Nimoy, for his part, was often willing to play along; he seemed to have a sense of perspective and often humor about himself, and to understand what he, and his most well-known role, meant to people.

As we look back at the life of Leonard Nimoy following his unexpected passing this week, here are some of those times when it only took him a few minutes -- or even one -- to bring a smile to fans' faces.

One doesn't get to have the level of pop culture cache and geek cred that Nimoy does without attracting the attention of the producers of FOX's long-running animated sitcom The Simpsons.

Nimoy appeared on the show a couple of times, but my personal favorite was probably in the classic episode "Marge Vs. The Monorail." A little taste is below.

The Ballad of Bilbo Baggins

In addition to being an actor and director, Nimoy was a writer, poet and musician. Here, we get a look at him reaching into a totally different corner of the nerd culture sphere in a song paying homage to The Hobbit...!

Leonard Nimoy and Spock hung like a specter over The Big Bang Theory, with the characters being huge fans and the actor coming up in conversation numerous times before they finally got him on the air.

This one hardly counts as a cameo, since it's Spock and ultimately the role was pretty integral to things...but we're counting it because, damn it (Jim), this was the best part of the whole Abrams reboot.

While it was always a treat to see Spock Prime, it's a little bittersweet that his final appearance shall be in Star Trek Into Darkness, when that cameo seemed somewhat unnecessary and the scene above serves as a near-perfect sendoff to Nimoy's Spock.