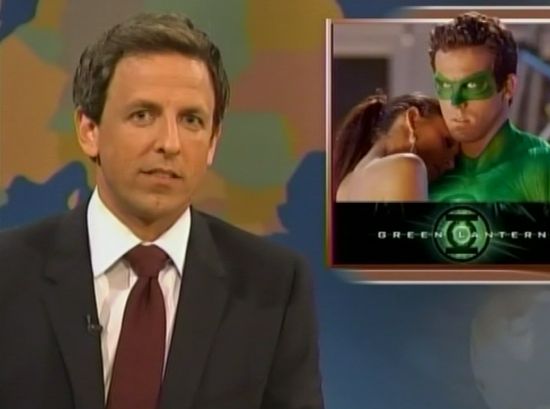 Tonight was the premiere of the 38th season of Saturday Night Live. Seth MacFarlane was the host, and his opening monologue consisted of him doing some of his famous character voices. Later in the episode, SNL poked a little fun at a much-maligned comic book movie from last summer. On the Weekend Update segment, Seth Meyers said, "Actors Ryan Reynolds and Blake Lively were married this past weekend." An image of the smiling couple with the word "Married" flashed on the screen next to Myers. Seth Myers continued, "It's nice for a couple to go into a marriage knowing it won't be the worst thing they've ever done together." The image then changed to Ryan Reynolds as Green Lantern with Blake Lively resting her head on his shoulder. The Green Lantern logo appeared below the image. As Seth Meyers gave a long pause, the audience erupted into laughter.