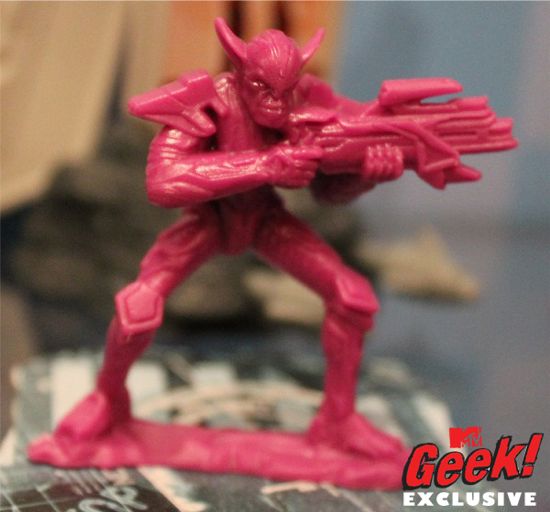 So the story goes that Marvel Studios President of Production Kevin Feige told Empire Magazine that the alien race in the Avengers movie was not Skrulls. Then, the Avengers Super Bowl commercial aired and the aliens sort of looked like Skrulls, but since an official Marvel Studios source had said no Skrulls, everyone started coming up with various theories. Now, there have been some alien toys tied into the Avengers movie photographed by MTV Geek and IdleHands at Toy Fair, and guess what? Yep, they're stinking Skrulls. So it's starting to look a lot like somebody at Marvel Studios might have been fibbing. And if someone at Marvel Studios was bending the truth, it kind of makes you wonder if a friendly neighborhood Spider-Man could show up as well.

Of course, it's always possible that there's some other explanation. Maybe the toy is a early prototype and the Skrulls were eventually changed to another alien race for legal reasons (like maybe the rumor about FOX owning the movie license for the Skrulls is true). Or maybe they are Chitauri, which are like another species of Skrull. Of course, if they are Chitauri, then saying that there are not Skrulls in the movie would still be kind of misleading. Also, it's always possible that the little purple figures are actually another species of aliens unrelated to Skrulls. It's hard to say for certain what something is when you're talking about small pieces of plastic. They sure do look like Skrulls though.

Skrulls In Avengers Movie After All: Is Spider-Man Next?