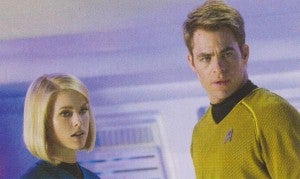 While the news around the comics business has been all Spider-Man, all the time today, the rest of the entertainment world has carried on their fascination with Star Trek Into Darkness, the upcoming, J.J. Abrams-directed sequel to Star Trek. Over at Collider, co-writer Damon Lindelof, best known for collaborating with Abrams on ABC Television's Lost and currently working on 1952 for Walt Disney, talked about "Easter Eggs" that tie the IDW Publishing comic book series, the upcoming video game and Star Trek Into Darkness into the same universe. "I think that the nods will probably becoming more in the spirit of, if you read the comics or you play the videogames, the nods will come from that direction versus the movie towards those things. If you play the game or read the comic books you will understand what role they have in connecting to the new movie versus the movie is going to be winking and if you played the game you're the only one who got that line, because that kind of stuff has the risk of alienating the people who haven't gone for the plus version," Lindelof explained. He added that the movie had been written before they had cast Benedict Cumberbatch as villain John Harrison, and that they went through and rewrote the character once Cumberbatch was signed to play to the actor's strengths. 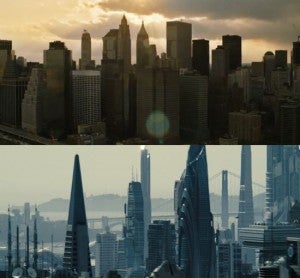 He also compared the approach they're taking on the sequel to The Dark Knight. On that same note, he compared the Star Trek films to the Marvel Comics movies, contrasting them with Star Wars by pointing out that since they come from the not-too-distant future and are headquartered here on earth, it's important to see some of that reflected in the films. "[S]uffice to say I think one of the things we felt a lot of people didn't know about Star Trek was that they didn't think that Star Trek was the future. You take something like Star Wars; Star Wars is not the future. It's a long time ago in a galaxy far, far away and Luke Skywalker is not a human being and isn't from the planet Earth," Lindelof said. "The idea in Star Trek, they are. They're in the 23rd century and these people are from Earth. The Earth needed to play more of a role in these movies, especially in the sense of giving the audience a degree of relatability. I think that in the same way that New York City becomes this anchor point for people in the Marvel movies; that's Spidey's stomping ground, that was the stomping ground for Tony Stark, that was the stomping ground for The Avengers, it's New York. We wanted to do the same thing with Earth in the Star Trek movies." Meanwhile, tomorrow's edition of Empire magazine features a roundtable interview with director J.J. Abrams and actors Chris Pine (Captain James T. Kirk) and Benedict Cumberbatch in which they discuss the approach taken to Cumberbatch's character. "Eric Bana did a great job [in Star Trek], but Nero was a much simpler, raving sort of furious dude," Abrams told the magazine. "The first movie was an origin story. The characters were all new to each other, so all they needed was a scary threat to face. It didn't need to be complex or nuanced. Just by default, given the number of characters and the structure of it, we could only go so deep. By necessity, it had to stop at a certain level. It had a ceiling. And now there is no ceiling."

Everything Coming to Paramount+ in December 2021