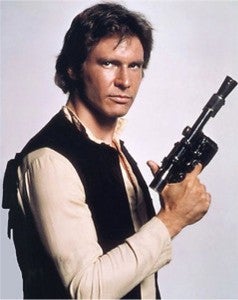 Disney's acquisition of Lucasfilm has inspired a lot of parody videos, most of them to do with Princess Leia joining the Disney Princesses. However, this most recent Star Wars parody video focuses on the Han Solo character. Even though there have been recent reports that Harrison Ford is willing to reprise his Han Solo role in Star Wars Episode 7, those reports remain unconfirmed. Before the whole Disney deal was announced, the impression Harrison Ford had given in the past was that he had no interest in playing Han Solo again. The Harrison Ford Star Wars Episode 7 Contract Negotiations: Ep. 1 - A New-ish Hope video deals with the Disney executives assigned the task of signing Harrison Ford to return for Star Wars Episode 7. Our favorite line is when Harrison Ford asks for George Lucas' ashes, because he assumed that momma's boy had to die for another Star Wars to get off the ground.