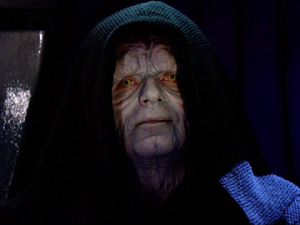 Earlier this month, there were a ton of rumors that Ian McDiarmid would be returning to reprise his role as Emperor Palpatine in Star Wars Wars Episode VII, possibly as either a clone or a force ghost. During an appearance at Fan Expo Canada, Ian McDiarmid addressed those rumors. While he firmly denied that any deals had been signed, he didn't completely rule out the possibility of the Emperor's return. However, McDiarmid believes that Star Wars Episode VII will feature new villains. McDiarmid said, "Well, there's so many rumors. I like you, know nothing, because there are no facts yet. We know that John Williams is doing the music. Kathleen Kennedy announced that when we were all in Essen, but she and everyone else is unable to say anything else at the moment, because I understand they're still working on the script." McDiarmid added, "There's been all sorts of rumors. No conversations have been had, and no deals have been struck. And anyway, I'm dead…but I could be resurrected. Yes, I've heard of ghosts, I've heard of clones. There's all sorts of possibilities. But until I get that phone call, like the one I had before, I won't believe I'm in it. And I think I won't be working for it, because it's a whole new world now that I think is going to be invented. There might be some old favorites in it, but I should imagine it's about the adventures of the descendents of the first characters and new villains that no one except George has ever imagined. And I hope it is, because the great thing about Disney is that it will continue in a new form with new people and be reinvented, just like all great works of art are sooner or later."