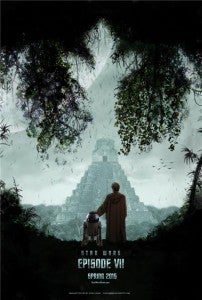 Ever since it was announced that Star Trek Into Darkness director J.J. Abrams would next be taking on Star Wars Episode VII, fans have wondered who might score the film. It might seem an odd concern; for most movies, after all, the music is an afterthought to the mainstream audience. Star Wars, though, is different. The iconic music of the first six films is instantly recognizable and John Williams, who also scored the original Superman movies, is a Hollywood legend. Abrams, too, is different, having worked with the same composer--Michael Giacchino--for many years. And after the way the director put his stamp on the Star Trek franchise, many expected him to do the same to Star Wars. Not so, says Abrams at the German premiere of Star Trek Into Darkness. "Michael Giacchino is an incredible composer, who I was lucky enough to begin working with on Alias," said Abrams. "He's truly one of the most influential members of our crew, and I think this score, he really outdid himself. Again, for Star Wars, it's very early days, but I believe that, going forward, John Williams will be doing that film, because he was there long before I was." That's interesting not only in what it means for Williams, but for the franchise in general, if Abrams believes the "veterans" deserve some deference. And while Star Trek fans may be a little frustrated that he didn't hold their franchise in the same regard, it's likely a matter of the studio's approach; even without George Lucas, Kathleen Kennedy doesn't seem eager to write off the past, and taking on a sequel instead of a reboot certainly changes the conversation.