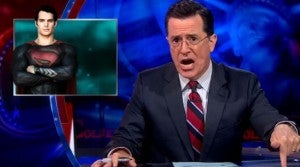 While most of the world is very excited about the upcoming Man Of Steel movie, Stephen Colbert has some (not so) serious issues with the film. During a recent Colbert Report, Stephen Colbert railed and ranted about the problems he has the movie. Foremost, Stephen Colbert is upset that a British actor has been cast in the role of Superman. Stephen Colbert said, "Excuse me, English? Superman is an American from Krypton. Read your constitution." And just like the rest of the mass media, Colbert also observes that Superman is not wearing his traditional red underwear. Colbert said, "This is disgusting. You can clearly see the outline of his...shall we say Fortress of Solitude." Colbert is apparently so upset about the loss of Superman's underwear that he mistakenly refers to screenwriter David Goyer as Dan Goyer. The Man Of Steel is scheduled to be released at movie theaters in the United States on June 14, 2013.