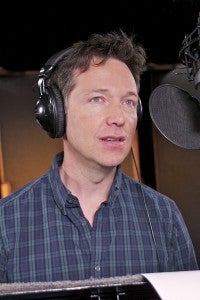 It may be quite a while before Man of Steel hits the multiplexes, but Superman has been keeping busy in DC's direct-to-video features; he'll appear in Superman vs. The Elite, out on June 12, as well as being featured in The Dark Knight Returns, the first two-part epic produced by Warner Premier for the DC Animated line of feature films. With all eyes on DC's premier superhero, the importance of getting his stories "right" can't be overstated, and so it's not particularly surprising that the film he's headlining is an adaptation of "What's So Funny 'Bout Truth, Justice and the American Way," one of the most widely-loved Superman stories of the last twenty years and one that's considered key to what makes the character resonate. George Newbern, who starred as Superman in the Justice League Unlimited series years ago and who is reprising the role in Superman vs. The Elite, had plenty to say about what makes the Big Blue Boyscout tick in a new interview released by Warner Premier. "I think you watch an actor like Jimmy Stewart in Mr. Smith Goes to Washington or It's a Wonderful Life, and you try to find the humanity of an everyman like that," Newbern said in the interview. "When I think of an All-American hero, I think of an actor in a role like that. And that's what Superman really is – an American hero. Super powers are just ancillary. It's that character, with all those principles and understanding, that's who he is right there." He went on to say that portraying "a sense of trust and power and charisma" is key to his take on the Man of Steel. "I think that's what we believe Superman is," he said simply. Check out some interview video with Newbern below, and watch out for our review of Superman vs. The Elite, coming shortly before the film hits next month.

Superman Vs. The Elite Star George Newbern on Returning to the Man of Steel