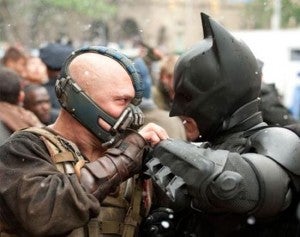 While The Dark Knight Rises was a great movie, it did come under criticism from some fans for some science defying scenes. In particular, many have pointed out Bruce Wayne's quick healing abilities and the bomb exploding at the end. Popular Science magazine has also taken issue with the same scenes from The Dark Knight Rises, naming the movie to its list of the sloppiest sci-fi movie science violations of 2012. According to Popular Science, it's unlikely Batman could have recovered from a smashed head and broken back as quickly as he did. However, the biggest issue Popular Science pointed out in The Dark Knight Rises was the detonation of a fusion bomb just a few miles away from Gotham City. With only 90 seconds to get the bomb away from Gotham City, Batman would have had to travel at 290 mph to get more than 7 miles away. Even at that distance, much of the city would have been incinerated. Yet, The Dark Knight Rises showed the citizens of Gotham safely watching the flash of the bomb and listening to the rumble at the same time. Popular Science also points out that the rumbling sound should have occurred about half a minute after the flash, because sound travels more slowly than light. Of course, The Dark Knight Rises is not alone among comic book movies called out by Popular Science. The Amazing Spider-Man receives a mild call out for blatant disregard for the conservation of mass, and The Avengers receives a moderate call out over the Helicarrier.

The Dark Knight Rises Called Out For Science Violations