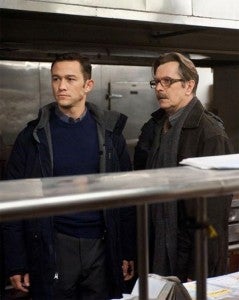 While it had initially looked like Christopher Nolan and Warner Bros. might keep The Dark Knight Rises under wraps until the week of its release, it turns out that Warner Bros. has done some limited pre-screening for members of the press and VIPs. A number of those viewers have taken to Twitter and message boards to give their thoughts on the film as well as drop a few spoilers. We're rounded up some of the early reviews and spoilers below, so if you don't want to know any of the secrets of The Dark Knight Rises in advance then stop reading now. First, we will cover the reviews. For the most part, the early reviews seem to be confined to a couple sentences on Twitter, so it's likely that Warner Bros. has some type of embargo in place on longer reviews. While it should always be kept in mind that a lot of the people that get invited to the earliest screenings are often connected in some way to the producers, the feedback offered can also be very telling. In general, all the first reviews from early screenings tend to be positive, but if a movie is really bad then there is often silence. It's a good sign that the early Twitter reviews of The Dark Knight Rises are indicating that the film is everything fans could hope for and more. In fact, there have been reports of tears of joy, applause, and standing ovations coming out of The Dark Knight Rises screenings. Also, the reviews have been overwhelmingly positive. If there were serious problems with the movie, then there would probably be a couple "it was a good movie, but…" type comments out there. In The Dark Knight Rises case, it even seems like the movie is so well-done that it might be the first superhero movie to get a best picture nomination. Here are some of the quick reviews and feedback on Twitter. Lauren Heistand @nickcarterroxs – "The Dark Knight Rises has just finished screening for the press and critics, receiving a STANDING OVATION!!!" Brian Limond ‏@DaftLimmy – "Just back from a special preview screening of The Dark Knight Rises. Very good. It's everything and more. You're gonnae LOVE IT!" Zach Pincus ‏@ZachPincus – "The Dark Knight Rises is not only easily the best Batman movie yet, but now one of my favorite movies I've ever seen. It was unbelievable!" The only longer review that seems to be online currently is from Manarchy Mag. In their review, they say "What has been created is not only the best collection of comic book movies ever produced, but also the most outstanding installment of the Nolan's Batman." So the reviews are wonderful, but what about the burning questions from fans? Is Joseph Gordon-Levitt really Robin? Is Miranda Tate really Talia Al Ghul? Does Batman die? Surprisingly, there have been relatively few spoilers to hit online yet. Most of the spoilers that have made their way online are via message boards at NolanFans.com and Superherohype.com. In regards to John Blake, early spoilers tend to indicate that he is not revealed as Robin/Dick Grayson. However, everyone seems to be in agreement that Joseph Gordon-Levitt delivers an incredible performance as John Blake and that his character plays a major role in the plot. If Miranda Tate is really Talia Al Ghul is also left a little up in the air among the spoilers. The overall indication seems to be that she is indeed Talia, but with some people posting conflicting info, it's hard to say for sure who has really seen the film or not. Other small spoilers that have been leaked indicate that there isn't a problem with Bane's voice in the film, which was an earlier concern. In fact, everyone seems to be in agreement that the villains are a strong point in the film with both Tom Hardy and Anne Hathaway delivering incredible performances. Everyone seems to be staying away from posting the ultimate fate of the Batman in the film as well. Photo Credit: Ron Phillips/Warner Bros.