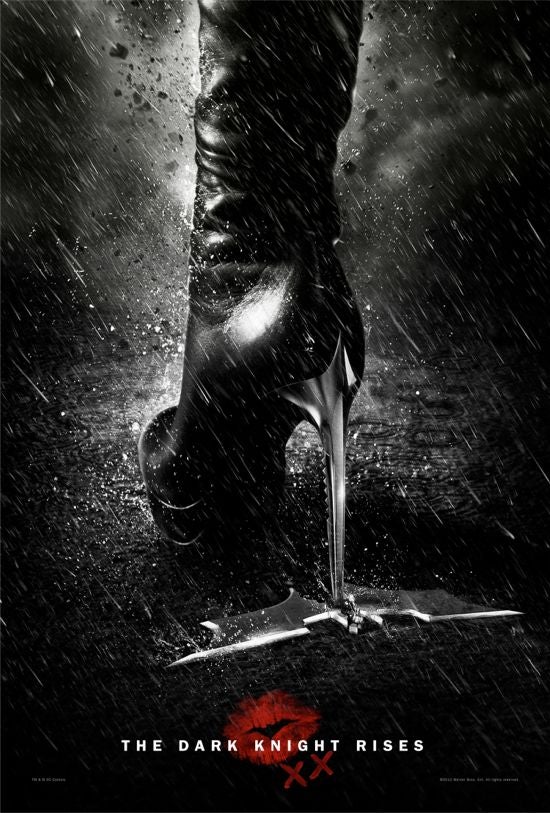 It's been a big week for The Dark Knight Rises. Not only did we get the first two Dark Knight Rises TV spots, but we also got a ton of new posters. First there was the third official Dark Knight Rises movie poster, which was sort of an update of the first poster. Then, there were six new Dark Knight Rises character posters, followed by four new theatrical banners. Now, a secret Catwoman poster has been revealed (via Batman-News.com). On the printed version of the third Dark Knight Rises poster released to movie theaters, there is a QR code. This QR code does not appear on the versions released online, so you have to make a trip to your local movie theater if you want to find it. Scanning the QR code reveals a hidden poster at the URL https://www.thedarkknightrises.com/catwomanbig.jpg. Similar to the Bane poster, the Catwoman poster makes a statement. The Catwoman poster shows a Bat symbol being broken in two by one of Catwoman's razor sharp heels. While most of the poster is in the familiar black, white, and gray, there is just a dash of color reflected by a kiss and two X's. Kind of a nice touch on the poster is that the lips come together in such a way as to form a Bat symbol in the middle. It's very interesting that the poster shows Catwoman crushing a Bat symbol, as the footage from the trailers and recent TV spots seemed to indicate Catwoman might be an ally for Batman. There has been much debate online as to which side Catwoman will be fighting on. This secret Catwoman poster gives us our first clue that there at least must be some point in the film where Batman and Catwoman are at odds, even if they eventually come together. The Dark Knight Rises will be released in theaters in the United States on July 20, 2012.