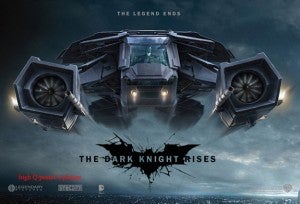 We had been told that there wouldn't be another full trailer for The Dark Knight Rises after its third debuted ahead of The Avengers last month, but here we are--a surprise trailer leaked out courtesy the Nokia Youtube page earlier today. It was exciting and full of quite a bit of information. What did we find the most intriguing? Well... "Mister Wayne." As we mentioned earlier in our initial report on the trailer, it's now official: Bane knows who Batman is when the two meet for what appears to be the first of at least two major brawls in the film. Fans of the comics have a pretty clear idea how that first brawl will end, but the way that it begins--with the revelation that Bane knows that Batman is Bruce Wayne--is equally interesting, because that's how it started in the comics, as well. Here's hoping Michael Caine brought his noggin salve. Is that the Batcave? The staging area for that big fight between Bane and Batman, which flashes by so quickly in every trailer, could be any number of locales but as we see more of the scene it appears to be the Batcave. Did Bane take the fight right to Bruce? (He's done it before.) It's impossible for me to tell--I am aged and have imperfect eyesight--so maybe a reader can correct me if I'm wrong. But there's definitely been talk that the Batcave's entrance in this film has a waterfall running through it, and that's definitely a waterfall that someone--probably Batman--goes over at some point in the fight. Party guests Batman Begins seems to be the major touchstone for this movie, with a lot of the things we've seen in trailers being a kind of twisted take on something from that film. Here, it's no different--the class-war rioters appear to have found their way to the rebuilt Wayne Manor and are tearing it apart, throwing around furniture and generally wreaking havoc while Bruce is nowhere to be seen. It feels like a kind of sideways turn on the party at Wayne Manor in Batman Begins, wherein Bruce's rich friends are scared away just in time to save them from Ra's al Ghul and the League of Shadows razing the property. Yeah, about those guys...! While I thought it was pretty obvious from the conversation about A Tale of Two Cities and all that, many observers have been surprised to see the size and scope of the mob winding its way through the streets of Gotham. Enough of them that it's probably worth noting that,yes, there is apparently a full-scale riot at some point in the film. Again, though, this shouldn't be a surprise. Not only have the filmmakers been pretty open about the movie's connection to a book about revolution, but there's shades of No Man's Land all over this baby. That wasn't exactly a comforting time to live in Gotham...! Four is better than three. After the third full trailer came out for The Dark Knight Rises, reports were that there wasn't going to be another one, and that anything more we saw after that would be from TV spots, ancillary advertising and the viral marketing campaign. But it turns out they had so much good stuff rattling around in their collective skulls that they just couldn't stop, and we got a fourth one. An omen, perhaps?