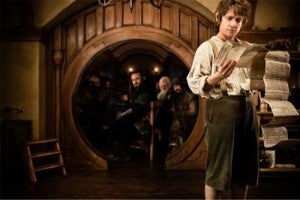 The Academy of Motion Picture Arts and Sciences have released a list of seven movies that are still being considered as nominees for this year's Academy Award for Makeup and Hairstyling. The films are Hitchcock, The Hobbit: An Unexpected Journey, Les Misérables, Lincoln, Looper, Men in Black 3 and Snow White and the Huntsman. While not all of these films will be end up being nominees, the it's likely that three of the seven will, so making this list makes the odds pretty good. The award often goes toward period pieces or elaborate fantasy pieces, all of which require something more than just making the actors look good and keeping continuity. Recent winners include the historical drama The Iron Lady and the first of J.J. Abrams's Star Trek films.

Nominees for 85th annual Academy Awards (colloquially known as The Oscars) will be announced Thursday, January 10 at 5:30 a.m. PT. The ceremony will be presented on ABC on Sunday, February 24, 2013.

The Hobbit, Looper, Men in Black 3 Are Oscar Finalists