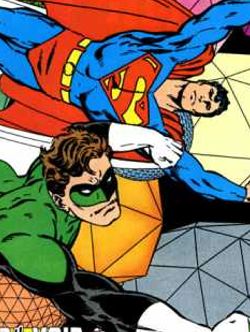 looks like it might be taking a page of out Marvel's book if and when the Green Lantern film becomes a reality. In a recent interview, Marc Guggenheim, one of the film's current screenwriters, reveals that the writing staff is trying to pack the film with tons of Easter Eggs. "Every time we sit down to write, we always ask, 'What do the Fans want to see?'" Guggenheim told Wizard Magazine in the January 2009 Platinum issue.

While Guggenheim is staying quiet on many of the Easter Eggs, he does reveal that Superman will play a small role in one of them. "When the ring is spinning around the planet looking for a successor to Abin Sur, it passes a guy with glasses working at the Daily Planet," he states. If the scene stays in the final version of the film, it will mark the first time that a major DC character has appeared in another superhero's movie.

Marvel started the trend of having characters make cameo appearances when Samuel L. Jackson's Col. Nick Fury appeared in a scene during the end credits of last year's smash hit, Iron Man. The trend continued with Robert Downey Jr.'s Anthony Stark popping up in the Incredible Hulk movie later that same year. Shortly afterwards, Marvel Comics and Iron Man director, Jon Favreau laid out a complex plan in which more Marvel characters would make cameos in upcoming films. This plan was established in order to pave the way for the Avengers movie, which will focus on an elite team of Marvel superheroes, some of whom have already been featured in their own solo films. The Avengers movie has a proposed release date of 2011 or 2012.

Could DC be following Marvel's "Avengers Assemble" plan in hopes of making a team movie of its own? Fans have been clamoring for a live action Justice League movie ever since a failed TV pilot was filmed in the nineties. And now, with Marvel intertwining its movie franchises, DC Comics and Warner Bros. may be inclined to follow suit. DC Comics has not formally announced yet that it too will combine its movie franchises in order to create a mosaic like Marvel is planning. Even though there has been talk of a Justice League movie, the movie currently appears to be on hold. However, if Guggenheim and his writing team get their wish, and the proposed Superman scene finds its way into the Green Lantern film, fans may find a huge Easter Egg that signals the green light for Justice League: The Movie.

The Man of Steel May Cameo In The Green Lantern Film