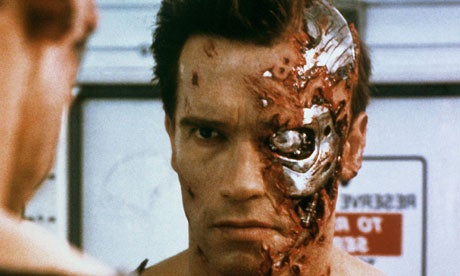 He's still not saying that he's actually taken the job, but how would Thor: The Dark World director Alan Taylor handle Terminator if, indeed, he does get it? Well, he thinks whoever gets the job ought to look to Christopher Nolan's Batman Begins for inspiration. In an interview with /Film, the director had the following to say about respecting the source material--of which there's plenty, now that we've had four Terminator movies and a TV series: "We all love the first two and I actually went back and watched them again and my respect level only went up. I think there is another famous franchise that had a wonderful beginning and then turned a little bananas….Tim Burton's first Batman is just glorious and by the time it got around to nipples on costumes and all that stuff it sort of lost its way. And for [Christopher] Nolan to come in an say 'I respect this material so much I'm going to take it up to *here,* that's a great inspiration.' I think any version, whoever is directing Terminator, would be very respectful and serve the first two and probably feel a bit more freedom by the end."