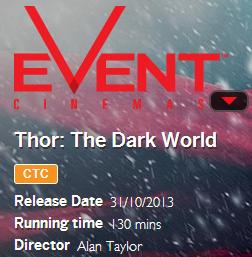 will clock in at two hours and ten minutes, according to Event Cinemas. That's not an official time yet, and might be subject to change, but it's common for exhibitors to be some of the first to know what the runtime of a film is. The image at right is from an unrelated article on Comic Book Movie, and doesn't appear to be on the Event website anymore. How long a movie runs can often play a big role in how much it will bring in at the box office in those all-important first couple of weeks; after all, a very long film will have fewer screenings throughout the day and, provided it's on roughly the same number of screens either way, that means less revenue.