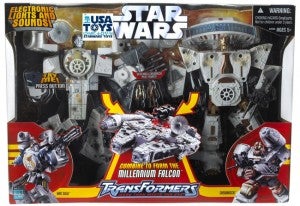 Having already acquired Pixar, Marvel and Lucasfilm, which more or less guarantees Disney at least one massive hit at the box office per year based on intellectual property they didn't develop themselves, a rumor is circulating today that the entertainment giant is considering making a purchase offer on Hasbro, the toy company that controls the G.I. Joe, Transformers and Dungeons and Dragons franchises, among others.

The source of the rumors seems to be a "Geek Spy" at MTV Geek, who says "we have it on good authority that serious discussions are happening at the highest levels of both Disney and Hasbro to fold the largest toy and game company on the planet into the Mouse."

In addition to the massively successful Transformers films, that would give Disney control over the floundering G.I. Joe franchise (its most recent installment was delayed six months to make tweaks to the special effects and, reportedly, the story as well). It would also give Disney the rights to the two biggest flops in recent cinema history--its own John Carter, which made only $75 million or so domeistically earlier this year on a $250 million investment, and Battleship, which cost $210 million and made only $65 million back. Battleship was produced by Hasbro along with Universal Pictures.

The encumbrances on Star Wars and Indiana Jones that worried some investors (to wit, Disney doesn't own the old material, just the right to make new material going forward) may be a stumbling block to any potential deal; like Indiana Jones, Paramount controls the rights to the old Transformers movie, and they may not be willing to cooperate with Disney on tie-ins if the studio is aggressively pursuing some of their most valuable intellectual property.

Of course, Paramount also used to distribute the Marvel Studios films, and managed to come to an amicable agreement with Disney that benefits both of them substantially, giving them essentially a silent partnership and a share of the profits on The Avengers and Iron Man 3. A greater concern for stockholders might be that with terrible reviews, fan backlash and a seemingly-directionless fourth installment reportedly in the works, the Transformers franchise appears on the decline and in spite of the potential value held by products like Magic: the Gathering, G.I. Joe and My Little Pony, none of them appear to be ready to be serious competitors at the global box office in the next few years.

The move, if it were to happen, would give Disney a huge presence in the boys' entertainment market, a demographic they were criticized for having a very weak presence in prior to the Marvel acquisition.

After Star Wars, Disney Said to be Mulling Hasbro Purchase