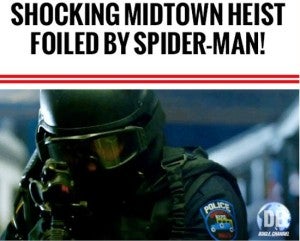 For the second time, The Daily Bugle Tumblr site, which is an official viral site for the Amazing Spider-Man 2, has teased the Shocker and the Sin Eater. Back in the November, an article on The Daily Bugle Tumblr made reference to an armored vault break-in by someone who seemed to have powers similar to the Shocker. Detective Stan Carter, who is also the Sin Eater, was mentioned as investigating the crime.

In the latest article posted to the Daily Bugle earlier today, the bank robber is actually mentioned by name as Herman Schultz, who is better known as the Shocker. Detective Stan Carter is also once again cited in the article. Here's the full article titled "Shocking Midtown Heist Foiled By Spider-Man." It's written by Ned Leeds, City Bureau.

Police arrived on the scene as Spider-Man finished webbing up the suspect, who was arrested and later identified as disgruntled engineer, Herman Schultz. Schultz created wrist-gauntlets that are capable of emitting a vibratory wave of pressure that proved capable of tearing apart a four-foot thick steel vault.

NYPD Special Crimes Unit Detective Stan Carter stated that Schultz had officially been remanded into custody and is being held at the Ravencroft Institute pending his preliminary hearing. When asked how a 'disgruntled engineer' could create such dangerous weapons, Carter said, 'Shocking, right? All that genius but no escape plan.'"

Amazing Spider-Man 2 is scheduled to be released in movie theaters on May 2, 2014.