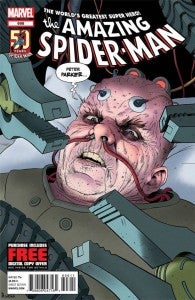 We avoided revealing the Amazing Spider-Man #698 spoiler yesterday, even though it was circulating widely on the Internet. However, since today is the day the comic gets released in comic book stores, Marvel Comics embargo against spoilers is over. In fact, many news sites are already starting to post about the highly controversial issue. However, if you don’t want to be spoiled, then turn away now.

Many wondered what horrible fate that writer Dan Slott had in store for Spider-Man that he felt he would need to go in hiding after the issue was published. Many speculated that Slott might be planning to kill off Peter Parker, but what he actually does is so much worse. Yes, if you can imagine, Slott bestowed a fate upon Peter Parker even worse than a simple death.

But Peter Parker’s fate is worse than mere death, because his final thoughts are realizing that one of his worst enemies now has control of his body. What does this mean for Mary Jane Watson? What does this mean for Aunt May? Given Peter’s relationship with Mary Jane, and Doc Ock’s past with Aunt May, the possible scenarios are horrifying to think about.

For many Spider-Man fans, this scenario is very upsetting because the essence of Peter Parker is gone. It also puts a villain in control of Spider-Man. Of course, everyone knows that somehow Peter Parker’s mind will return. It has to because this storyline wouldn’t play nicely with the Amazing Spider-Man movies.

The big question is how long will Otto Octavius be in control. With Marvel Comics launching the Superior Spider-Man as part of Marvel Now, it certainly appears that this is a storyline that won’t be going away soon. As a Spider-Man reader, do you see this change as a fascinating new twist or is it just an over-hyped gimmick that will have you swearing off reading Spider-Man forever? 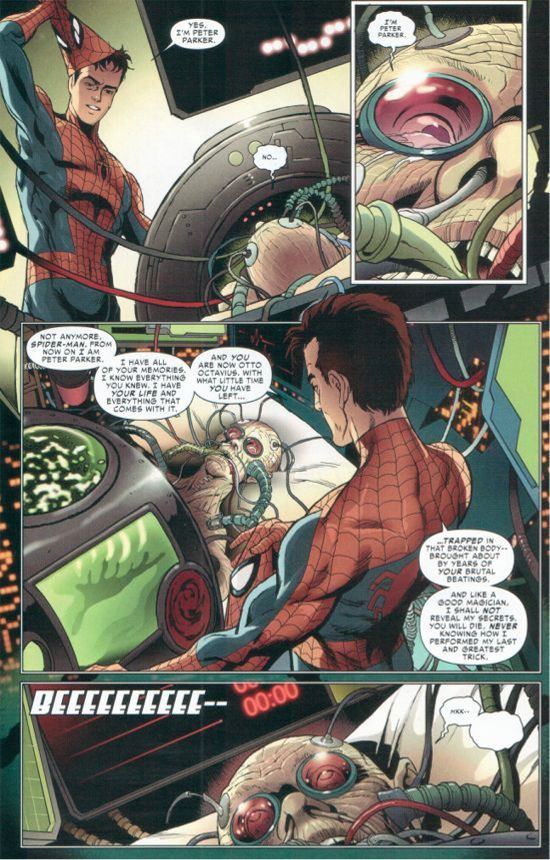