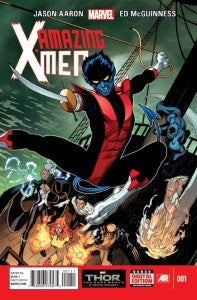 Do we really need a fifth ongoing X-Men series? Jason Aaron and Ed McGuinness seem to think so, and they make a good case for it in Amazing X-Men #1, a beautifully drawn and new reader friendly addition to the X-Men line.

Beginning “The Quest for Nightcrawler” storyline, the issue starts with a cold open featuring Nightcrawler hanging out in Heaven after his death in “Second Coming.” That's right, no time travel, clones, body doubles, or sly switcheroos here. Its a bold decision by Aaron to accept that Nightcrawler perished and dive into his afterlife rather than using a simplistic plot device to bring him back to life, or worse, trying to supply a contrived explanation of how he didn't really die at all.

Bringing Azazel into the equation is an equally bold move on Aaron's part. For most X-Men fans, he is an unpleasant reminder of “The Draco,” one of the worst X-Men stories ever told and one that all but ruined Nightcrawler as a concept and a character. In a story that features Nightcrawler in the afterlife, Azazel is the logical choice for a villain, but his presence will still leave a bad taste in the mouths of most fans.

Heaven is a beautiful place, at least as drawn by Ed McGuinness. The landscape in the afterlife scenes is as breathtaking as the characters describe. All rolling waterfalls and lush greenery, the scenary is particularly well framed by McGuiness's layouts, which have a touch of art nouveau style to them.

Nightcrawler himself hasn't looked this good in decades. McGuiness draws the “blue elf” with a svelte, compact frame and an expressive, energetic demeanor. Fans won't realize just how much they've missed Nightcrawler until they've seen McGuinness draw him in combat, BAMFing about his enemies and tri-wielding swords.

Aaron focuses on Nightcrawler's duality as a character torn between his faith and his fondness for adventure. Nightcrawler knows he should be content in the heaven that his faith has earned him, but he can't help looking over the edge of Paradise for one more adventure. He seems to welcome the unholy intrusion upon sacred grounds by his father's henchmen as a rare opportunity to let his swashbuckling side out to play. Its a take that highlights the character's complexity and brings out all of the characteristics that made him such a fan favorite over the years.

The second half of the issue takes us back to the Jean Grey School, where Firestar is beginning her first day as a member of the school's teaching staff. The setup is quite similar to the first issue of Whedon and Cassaday's Astonishing X-Men, substituting Firestar in for Kitty Pryde as the point-of-view character, but its executed well despite its familiarity.

Readers are given brief introductions to the other members of the Jean Grey School's staff, all written in a way that will feel familiar to anyone who has been following Aaron's work on Wolverine and the X-Men, raging hormones and all. While the pacing slows down a bit for this portion of the story, it doesn’t exactly get comfortable. Beast finally gets to the bottom of school's Bamf infestation, which ends up taking the X-Men away on another adventure.

And if you're going to bring Nightcrawler back from the dead, then doing it with an adventurous tone seems absolutely appropriate. Amazing X-Men #1 is a gorgeous comic to look at. The second half of the book feels a little slow compared to the first, but it also makes the book easy to hand to anyone who has been looking for a place to start with the modern X-Men books. There may seem to be more X-Men books on the market than you know what to do with, but, with Aaron and McGuinness on the case, you may want to make room for one more.