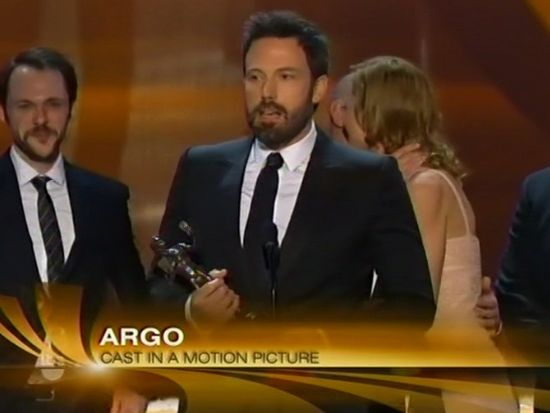 As Argo continues to rack up awards, The Academy Awards are starting to look pretty silly for not nominating Ben Affleck for best director. Tonight, Argo won the Screen Actors Guild Award for Outstanding Performance by a Cast in a Motion Picture.

In accepting the award, Ben Affleck said, “I am really amazed and stunned. There are so many great actors here, and this is voted on by our brothers who are actors. There are a hundred and some thousand people in SAG. Some of them never get to come to a place like this, and they vote from home. Fist, I want to thank my wife, who I love, and our kids, who I also love, and Warner Bros., who I love, not quite as much but I do love them.”

Affleck also added, “This has nothing to do with me. It has to do with the incredible people who are in this movie. The people you see on stage.”