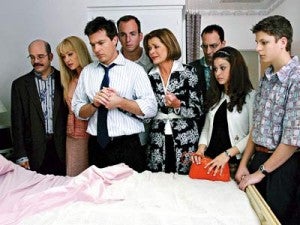 According to Collider, the fourth season of Arrested Development--that's a ten-episode order, all to be released to Netflix at the same time at some point in 2013--begins today and will continue through the fall.

The cult-favorite series, which stars Jason Bateman, Portia DeRossi, Archer's Jessica Walter and Scott Pilgrim vs. The World's Michael Cera, among others, aired its last new episode in 2006 before being cancelled by Fox, the network on which it aired.

That has widely been viewed as a "huge mistake" and Arrested Development's rabid fan base have been petitioning for the show to return ever since, and showrunner Mitch Hurwitz talked for years about making a feature film that would give the characters resolution.

Instead, he's taken the show to Netflix, where these ten episodes will "air" and a fifth season is possible, according to Hurwitz.

The ten episodes will reportedly each revolve around one member of the family, catching viewers up with where they've been and how they've been functioning in the years since the last episode aired, with the tenth being the "reunion show," so to speak, finally bringing everyone together. While all of the principal cast--plus producer-narrator Ron Howard--will return for the resurrected series, it's impossible to say yet whether many of the show's high-powered recurring guest stars (such as Henry Winkler, Scott Baio, Andy Richter, Ed Begley Jr. and Charlize Theron) might return as well.