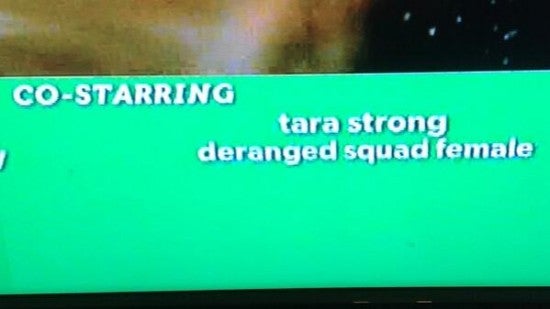 Voice actress Tara Strong, who plays Harley Quinn in the Batman: Arkham video game franchise and appears as Raven in Teen Titans Go!, appeared in a surprise cameo on last night's episode of Arrow as "Deranged Squad Female," an Easter egg that everyone had already figured out was in fact Harley Quinn.

(Thanks to Green Arrow TV for the screen grab. You can check out more about Strong there.)

"I want to manage expectations with respect to Harley Quinn," Executive Producer Marc Guggenheim told Collider before the episode aired. "She was always intended to be an Easter egg. I don’t want people to go in with incorrect expectations and walk away from Episode 16 disappointed."

Of course, it's just th eopposite, for the most part. Fans were excited to hear Harley's "real" voice, and given Strong's physical resemblance to the character, there's already a Twitter campaign underway to get her the gig should the story allow for Harley to join Arrow. How likely is that, given the fact that Gotham will be airing on Fox in the fall? Guggenheim told Collider that doesn't really play into it.

"That’s part of the ongoing relationship and discussions that we have with DC," the producer said. "Things have not really changed with Gotham. It’s the same thing that it always is, which is that we have an idea, we go to DC, we talk about it, and we find out where the lines are and which characters are available or not available."

The physical body of Not-Harley in this episode was presumably still played by Cassidy Alexa, but it's unlikely that an actor with so little experience would get such a key role in the DC Universe if Harley were to actually join the show.