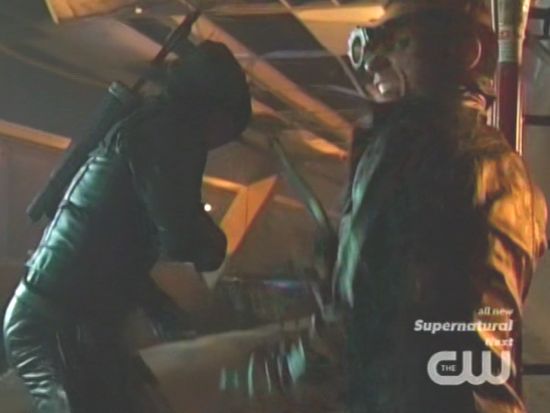 In Lone Gunman, Oliver Queen selects his next target as James Holder, who installed faulty smoke detectors in low income buildings. But before Arrow can bring James Holder to justice, someone shoots Holder dead and also puts a bullet in Arrow’s arm.

While Arrow’s injury at first appears to be a minor wound, he soon realizes that the bullet has been poisoned. Arrow rushes to drink an antidote, but he passes out and has a flashback to the island. On the island, Oliver Queen is disoriented from having been shot with an arrow by a mysterious man in a green hood. The same man who shot Oliver is also trying to nurse him back to health.

Arrow traces the poison used in the bullet to an assassin known as Deadshot. Arrow is upset that Deadshot doesn’t kill for justice, but instead kills for money. Arrow decides to put Deadshot at the top of his list.

Oliver Queen visits a warehouse that he plans to turn into a nightclub. Oliver’s plan with the nightclub is to put his base underneath it and to use the nightclub as a cover as to where he spends his nights.

Arrow is able to trace one of the bullets from Deadshot to the Russian mafia and pays them a visit. Meanwhile, Detective Lance pays a visit to Walter Steele, because two men have been killed who were competing in an auction for Unidac Industries against Queen Industries. Detective Lance thinks Walter could either be behind the killings or a future victim.

At a nightclub, Oliver Queen ditches his bodyguard at the door. Oliver’s sister shows up wasted at the club, and she tells Oliver that his best friend Tommy Merlyn and his former girlfriend Laurel Lance have been sleeping together while he was gone. Oliver has a flashback to the island. He wakes up in a cave and runs away from the green hooded man, but he gets caught in a net.

The Russian mafia calls Oliver Queen and gives him info on where to find Floyd Lawton (the real identity of Deadshot). Arrow shows up where Lawton is staying, and after exchanging bullets against arrow, Lawton escapes out a window. Oliver takes Lawton’s bullet-ridden laptop to someone in his company to try to get information from it.

The laptop traces back to Warren Patel, who is also someone trying to buy Unidac Industries. Arrow goes to Detective Lance and tells him that Warren Patel hired Deadlock to kill all the other buyers. Detective Lance sends his men to try to protect the auction.

However, Deadshot takes out one of the policemen and lines up a shot at Walter Steele. Detective Lance sees the red target light on Walter and pushes him out of the way just in time. Oliver Queen changes into Arrow and heads out to track down Deadshot.

Arrow busts through a window behind Deadshot. The two engage in some hand-to-hand combat, before shooting bullets and arrows at each other again. Bodyguard John Diggle shows up and is hit by a poison bullet. Arrow eventually wins the showdown by putting an arrow through Deadshot’s eye. Oliver Queen administers an antidote to John Diggle, but now Diggle knows his secret.